Blade Runner 2049 - Is it as good as Ridley Scott's masterpiece? 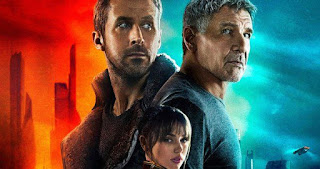 “To be born, means you belong to someone"

Walking into the cinema...
Two big questions need to be answered with Blade Runner 2049. Do you need to see the first film and is it as good as Scott's seminal masterpiece?

Ridley Scott’s science fiction classic has confounded audiences since its 1982 release and has produced reactions over the years that range from admiration to frustration. Philip K. Dick’s vision of replicants trying to extend their lives in a dystopian Los Angeles was unlike anything in cinemas prior and continues to be a template for writers and directors. When Scott announced that a sequel of Blade Runner was in consideration, the announcement was met with a similar level of mixed reactions that ranged from obvious enthusiasm to skeptical consternation. Can the director Denis Villeneuve (Arrival) live up to the inevitable artistic expectation and comparison with Blade Runner 2049?

Officer K (Ryan Gosling) serves as a blade runner for the LAPD in 2049, a role that requires that he must find, identify and ‘retire’ older models of replicants. While on an assignment amongst the farms surrounding the city, he uncovers clues that lead him on a journey that could unlock his past and could potentially open the door to a new future for replicants and humanity. Upon further investigation, he uncovers a web of deceit and corruption that leads him to cross paths with Niander Wallace (Jared Leto) who is one of the most powerful men in the world as the head of the replicant creating Wallace Corporation. Along with law enforcement, the sociopathic entrepreneur proves to have a vested interest in K's discoveries. In an attempt to stay ahead of Wallace’s contemporaries and the LAPD, the investigator must try to find the answers to his questions from the man who has been in hiding for over 30 years, Rick Deckard (Harrison Ford).
The two questions that most will ask about Blade Runner 2049 are if viewing the original is necessary before experiencing the sequel and more importantly if Villeneuve’s creation comparable to Scott’s original? The first question can only be answered with another question, how could anyone not have seen Blade Runner? It should be on anyone's must-see list of classic films and it is essential to see before embarking on the 163-minute journey that comes with seeing the sequel. The second query will take more time to answer.

Similar to the first outing in the rain-soaked streets of Los Angeles, this storyline is a combination of visionary brilliance, intense frustration and something that is unique to itself. Denis Villeneuve would only do this film with the blessing of Ridley Scott and he received euphoric support from the original creator. The younger director’s visionary choice to partner with cinematographer Roger Deakins (Sicario) was a first step in putting his own claim on this treasure. The visual smorgasbord that is on offer throughout the blade runner's search for answers helped to make the marathon screening worth every minute. These visuals complemented the numerous twists of the well-crafted screenplay that will satisfy many of the queries fans have had for years, but will open a fresh batch of speculations for the future of this franchise. Plot holes do exist and the script is not perfect, but it does move dangerously close to receiving an excellent mark. The content will be perplexing for some, but proves to be an exceptional follow up to the first instalment of the canon.
The superior artistic elements were supported by the strength of a marvellous cast and show that the Canadian director has an eye for every detail. Each actor has a point and fills the role they represent on screen. Gosling continues to show that his brooding and understated style of acting was the right choice for his character. Demonstrating that he was able to convey depth of emotion with minimal deviations in his demeanour. Jared Leto, Ana de Armas, Sylvia Hoeks and Carla Juri were all strong choices for their part in this potential cinematic gem, but it was Robin Wright’s LAPD Lieutenant Joshi that was the standout amongst this talented troupe. She manages to steal each scene and provides a dangerous beauty to the film. Her performance tops off a bevy of magnificent acting achievements by all involved.

To answer the second question, this film builds on the strengths of its predecessor but evolves into something more. It is hard not to compare the two, but what should be on the 'must do' for audiences is to view the first film. Then go and experience Blade Runner 2049 and realise that this is like viewing bookends of cinematic brilliance.

Due to the mature content in this film it is for adult audiences only.
REEL DIALOGUE: What are some of the bigger questions to consider from this film? 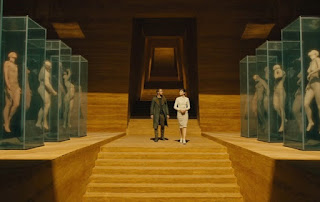 Where does mankind find its identity?  It is a theme throughout cinema in 2017 and one that has plagued philosophers, theologians and university professors for centuries. Denis Villeneuve continues the discussion on the identity of humanity in this second chapter of Blade Runner. In this fictional world, replicants are a creation of man and were meant to become even better than humans. The problem with these humanoid creations is they merely desire to be human.

Keeping in mind that this is a work of fiction and replicants do not exist (Yet). It does not minimise the fact that people continue to question what it means to be human. One reference that can answer this question is the Bible. It states that we are made in the image of God, which means that God has a particular position for us in this world. This answer merely begins to provide an answer to this existential query, why not dig in more? It is interesting that the study of humanity could bring one closer to know God.