Baby Driver - One of the most innovative, visceral and genre-bending films in years - 5 stars 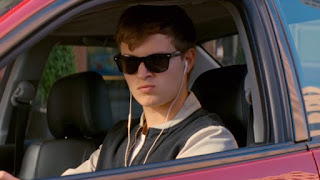 'He had an accident when he was a kid. Still has a hum in the drum. Plays music to drown it out. And that's what makes him the best.' - Doc

Walking into the cinema...
For those who are just catching up, director Edgar Wright has a cult following like no other director of his generation. The creator of Shaun of the Dead and Hot Fuzz, this highly anticipated venture does not include Nick Frost or Simon Pegg. Will it connect with audiences?

Russelling Reviews: 5 stars
Few directors would choose to leave behind the world of Marvel to follow their personal dreams, but Edgar Wright is not your typical director. The concept of Baby Driver had been spinning around in his mind since 1994 and when things did not work out with his directorial tenure on Ant-man, the next project for this pop culture icon was the story of the talented driver with tinnitus (a hearing disorder). With multiple Academy Award winners in the passenger seat and some of Hollywoods hottest young talent along for the ride, this looks like a thrill ride that will define this holiday season and potentially redefine a genre. 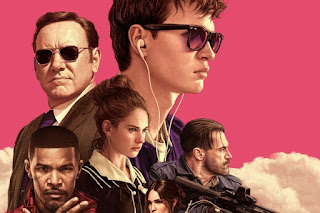 Baby (Ansel Elgort) lives to the beat of a different soundtrack than the rest of the world. He has a gift behind the wheel of a getaway car, which is the key to Doc’s (Kevin Spacey) heist operation. Each robbery incorporates different specialists, but the talented young driving genius always provides the getaway. Baby is working to escape this world of crime and is especially motivated when he meets the inspirational and innocent waitress, Debora (Lily James). Then like hearing a scratch on the proverbial vinyl album, the brakes are put on his dream of leaving the world of crime behind. Even after paying off his debt to Doc, Baby gets manipulated to get behind the wheel for one last job.
There are not enough words to describe all of the rules and barriers that this film breaks through in 113 minutes. Without exaggeration, Baby Driver is one of the most innovative, visceral and genre-bending films in years. It is a film lovers fantasy and will be on continual play on the cinephile’s playlist for years. All that being said, it will not appeal to all audiences. It contains the originality and genre-bending nature of La La Land and the utter visceral tone of John Wick. Which means that this is a film for those who are willing to consider a violent, musically-inspired joyride with some amazing car chase scenes.
The premise seems simple enough, but as Wright unpacks each act, scene and portion of dialogue of Baby's life something deep and magical appears on screen. Baby Driver  is reflective of the two decades that he has been preparing this project. The brilliantly calculated music provides the foundation for a fascinating study in morality and romance. This capitalises on the simplicity of the story, which lends to a profound depth that needs to be experienced and pondered through multiple viewings.

Every detail was meticulously thought through including the attention to detail in the choice of each cast member. Kevin Spacey, Jamie Foxx and Jon Hamm were perfectly placed in their supporting roles as the circle of criminals. They are amazing in themselves, but the whole film was brought together by the understated and formative performcne of Ansel Elgort. His relationship with each character and his means of delivering an excellent performance through minimal dialogue bodes well for his future as a lead actor. He managed to show tenderness with his foster father, proved his physical and mental swagger against the intensity of Jamie Foxx and still is able to woo Lily James convincingly into following him wherever he goes. This lightning rod role leads to an electricity throughout the cast and leads to a powerful cinematic experience.
Baby Driver is not like anything in cinemas this year and should be considered by all serious fans of movies. Edgar Wright has delivered a work of art that borders on delivering a masters class in film direction. Like riding in a beautiful convertible Mustang along the coastline at unimaginable speeds, this road trip can only be understood by experiencing it for yourself.

There is nothing like a well told story. Baby Driver is proof that the best stories do not need to be complex to be considered profound.

We are wired for story. The Master storyteller began His story with a simple, but meaningful statement, "In the beginning, God..." These four words have lead to a multitude of study and conjecture throughout time. What is fascinating is that later in the original narrative of the Bible it states that mankind is made in the image of God.

This line of logic leads to the conclusion that we are all bastions of stories and that we all desire to hear more. This even explains why audiences still file into theatres, readers read books and universities devote so much time and effort to the notion of 'story.'

Baby Driver is a story that has action at its very core and may even challenge people to do more than just to go see a good action movie. The hope would be that people would  consider more of their story and how the Master storyteller has played a role in every aspect of their history.

What is your story?