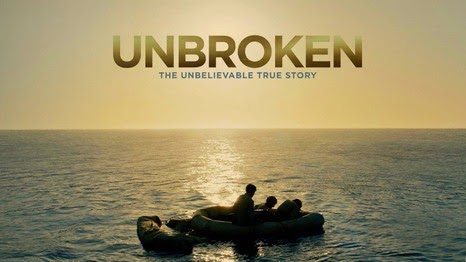 Louis Zamperini's story has been floating around Hollywood since 1957. Will this epic story be successfully translated onto the big screen?

Walking into the cinema...
Unbroken has been one of the most anticipated films of 2014. The book has been an international bestseller and has exposed Louie's inspirational story to the world. When Angelina Jolie announced that she would be directing the film, waves of skepticism poured forth across the media. The hope was that the magic of the story would survive and live on like the story of the book.

Louis Zamperini (Jack O'Connell) grew up as the son of Italian immigrants in California in the depression era. His brother helped lead him from a life of juvenile delinquency to a life as a national track star. After an heroic run at the 1936 Olympics, Louis looked forward  to running in the Tokyo Olympics in 1940, but World War Two broke out and dashed those dreams. He served during in the South Pacific on bomber flight crew during the war. After a near-fatal plane crash, Louie and two other crewmen survive and spend a harrowing 47 days in a life raft. After surviving their ocean ordeal, they are rescued by the Japanese navy and sent to a prisoner-of-war camp. Louie is eventually sent to the camp run by tyrannical leader, Watanabe or as the prisoners called him, The Bird (Takamasa Ishihara). Because of his world-wide notoriety as an Olympian, The Bird targets Zamperini and makes an example of him throughout his years in captivity. Through the torture and abuse, Louie and the other prisoners must figure out how to survive until the end of the war.
Zamperini lived an unbelievable, but compelling life. Julie Hildebrand's epic tale of Zamperini's life has been celebrated by many around the world. Louie's story has been travelling around Hollywood since 1957, and could not find the right director or lead actor. Angelina Jolie's choice to helm the Unbroken project presented a daunting task for the movie star turned director.  Her film inevitably suffer from comparison to the much loved literary treasure.  Jolie managed to work with Joel and Ethan Coen to formulate a script that would translate to the big screen. With the stellar production crew and the quality of story, this film has the potential for greatness or potential for failure. Interestingly, the film falls squarely in between these two positions on the scale of success. Angelina did an admirable work in getting as much of Zamperini's story into the film. She would have to choose what to keep and what to share, because to capture all of his story in one film was unrealistic. She was able to achieve much of the back story and his Olympic glory through flashbacks. Also, the script cuts out much of the finer details from the book. Because of the lack of subtle nuances, the film starts in full throttle and never relinquishes it's intensity. The scenes during their ocean experience went a bit too long, but even this portion becomes laborious and exhausting. By cutting out some of the subtle nuances of the book, Jolie seemed to miss some of the light and shade of the story which could have made this film more compelling. The ocean scenes and prisoner of war camps gave the needed atmosphere, but the special effects seemed very elementary. Jack O'Connell and Takamasa Ishihara give excellent performances in their on-screen adversarial roles. Domhnall Gleeson and Garrett Hedlund were well cast in their supporting roles, but did not excel beyond supporting players in Zamperini's story.  Unbroken was an entertaining experience, but unlike the book was merely a celebration of the human spirit opposed a story of salvation and forgiveness of his actual life.
If you have not read the book, the curious suggestion by this reviewer would be to watch the film prior to reading the book. The film was good, but the book gives a richer telling of Zamperini's life. Hildebrand's book was a joy to read and a true celebration of Jesus' impact on Louie's life. With all of the difficulties and challenges that come into his life, it was not until he come to a saving faith in Christ that the story becomes a true story of salvation and forgiveness. Zamperini's life is truly one to be celebrated, but it all sets up the impact of Jesus on the story that enriches the story and leaves the reader with a more satisfying experience. Jolie alludes to this part of his life, but without it being a centrepiece of the film she misses the heart of the story. I would recommend that anyone would go to see the film, but do it with the intention afterwards of reading the book. Your cinematic experience will be enhanced and your enjoyment of this story will be richer.

Leaving the cinema...
Rarely does a film finish with audience applause, but Unbroken concluded with a flurry of praise from the cinema's attendees. This is a compelling story and worth seeing, but after seeing it, take time to read the book.