Never Look Away - For those willing to see it, you will not be able to look away - 4 stars 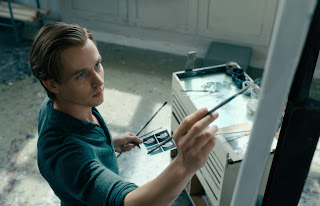 'I do it because I can.' - Kurt Barnert
Russelling Reviews: 4 stars
It is difficult to imagine a different battlefield for the hearts of Germans than the European fields where the Nazis fought the Allied forces. These are what most audiences are familiar with as so many have been portrayed on screens, outlined in books and become the source of a multitude of stories worldwide. What most people never consider is that World War II devastated a whole generation and the culture of Germany. One key facet of the German lifestyle that was impacted significantly was the art community. Never Look Away is inspired by one of the country’s most celebrated artists, Gerhard Richter, and his journey from a boy in pre-war Germany to his establishment in the art community. 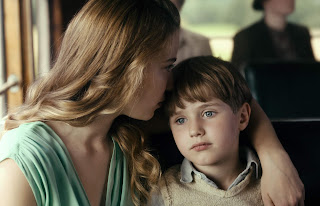 Richter's character was renamed for the film to Kurt Barnert (Tom Schilling) and we are intoduced to him as a child. The film opens with him spending the day with one of the artist’s most significant influences, his aunt Elisabeth (Saskia Rosendahl). The eccentric young woman would take the little boy to some of the great modern art displays in Germany. She would regularly tell him to "never look away" because "everything that is true holds beauty in it.” Even when she is taken away to a mental health facility because she was diagnosed with schizophrenia, the little boy does not look away, despite not fully understanding what is happening. He would never see his beloved aunt again, because of the Nazi euthanisation programme that eliminated the mentally ill from society during their rule.
After the end of the war, Kurt went on to study painting at the Dresden art school and falls in love with a vibrant and engaging fashion student, Ellie Seeband (Paula Beer). As they grow closer and she eventually falls pregnant, her father does all that he can to drive a wedge between the young lovers. Carl Seeband (Sebastian Koch) is a successful gynaecology professor who had survived the POW camps during the war and desired a better life for his daughter. Despite the doctor’s efforts, he is unable to keep the couple apart, they eventually marry and flee to West Germany where Kurt can enrol at the famous Düsseldorf Art Academy. During his time of artistic discovery, the painter unwittingly unearths a  dark side of his past that connects his family's story to that of his vindictive father-in-law.
This is an appropriately titled film from Florian Henckel von Donnersmarck who was the Academy Award® winner for Best Foreign Language Film for his directorial debut, The Lives of Others. Despite containing disturbing sequences involving abortion, euthanasia and mental illness along with being over three hours long, it proves to be impossible to avert your eyes. Even with arbitrary stagnant moments, the screenplay is masterfully put together to keep audiences engaged until the ending credits.
To say this is an art film would be minimising the whole experience. It would be better to say that this is an artistic representation of a painter's journey through life. Going beyond the inspiration for his body of work, this delves into the world that influenced him and the art of an era. Proving that there are subjectivity and cultural influences that drive the creators of art, it helps to show why so many works of art are misunderstood, because of their personal nature. 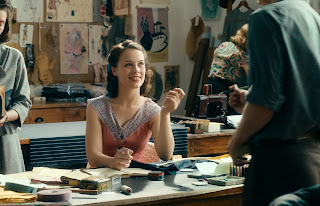 A parallel line to the artist's life is the depiction of the horrors that were supported and performed by the health care professionals of the Third Reich. The Holocaust has been portrayed before, but many may not be aware of the insidious actions that came due to the desire for the pure bloodline of the Arian race. The German writer/director addresses the treatment of the mentally ill, the physically disabled and those who might pollute this abhorrent agenda. Showing the acts of people being torn away from their families, forced abortion and the eventual euthanasia of this sector of humanity proves difficult to stomach, but becomes a critical part of the narrative.
Admittedly, Never Look Away is not meant for all audiences. With the confronting imagery of the war atrocities and the bohemian lifestyle of the artists on display, the mature nature of the story will cause most to pause. Yet for the artists of the world, for those who yearn for rich cinematic storylines and for those who appreciate the messiness of life, this is a confronting and sublime exploration of a portion of history that most never knew took place. An encounter that will prove to be impossible to for anyone to look away from in the end.

REEL DIALOGUE: How do you react to the atrocities that humans enact on other humans? 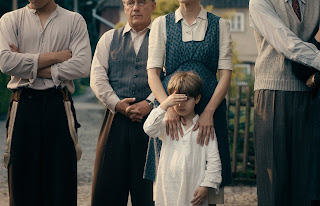 "I praise you, for I am fearfully and wonderfully made. Wonderful are your works; my soul knows it very well." Psalm 139:14

This story struck hard at the heart of those of us with children who were born with physical limitations. To see human life minimised and for people to be killed because of their physical or mental limitations made this difficult to endure. Yet within the story, out of the horrors came an appreciation of life.

One element of the teachings of Jesus that reflected the words of Psalm 139 shows that God values each and everyone of us.


"Are not two sparrows sold for a penny? And not one of them will fall to the ground apart from your Father. But even the hairs of your head are all numbered. Fear not, therefore; you are of more value than many sparrows." Matthew 10:29-31

Jesus is saying that God does care about his creation, but more importantly he cares about each person on earth. Each man and woman has value and even though he knows every sparrow and where it falls, yet mankind's value exceeds the sparrows. To the point that God cares so much about humanity that he knows the numbers of each of our hairs and has provided a means to spend eternity with him through his Son.

This all means that regardless of your life experiences and physical or mental limitations, you are valued by God. Which means that there is no one that God turns his back on when they genuinely seek him.