Kids Korner: Toy Story 4 - The gang is back together for an existential adventure - 4 stars (Includes RR's ranking of Pixar films)

'You are a toy!'
Tom Hanks as Woody

The world was introduced to Sheriff Woody (Tom Hanks) and Buzz Lightyear (Tim Allen) in 1996 alongside the forthcoming animated powerhouse called Pixar. Being the first full-length computer-animated film, this combination of talent and technology proved to be perfect for the launch of the studio and these characters. By 2010, Toy Story 3 seemed to leave things on one of the most heart-warming notes in movie history and provided a fitting end to this franchise, but the folks at Disney thought the world needed at least one more chapter.

Even though it has been nine years since that last film, the story begins where the previous chapter left off with Bonnie (Madeleine McGraw) getting ready to enter the exciting and terrifying world of kindergarten. Since the time since Andy gave the little girl his beloved toys, the hierarchy has begun to change amongst the playthings. Woody still feels a responsibility to provide joy in the life of the little girl, but he has been regularly left behind in the closet. On the day for Bonnie to be introduced to her classmates, Woody decides to stow away in her backpack to ensure she has a good first day. He becomes instrumental in helping with an arts and crafts project that becomes a new beloved toy called Forky (voiced by Arrested Development’s Tony Hale). A spork who comes to life and experiences an existential crisis and has to come to terms with his new purpose as a cherished toy as opposed to a disposable utensil.
As kindergarten is about to begin for Bonnie, her parents decide to take her on an RV cross-country road trip. She takes all of the toys with her in the camper, but tragedy strikes and Forky jumps from the vehicle. Going against his better judgment, but following his parental instincts, Woody goes after the confused spork for the sake of Bonnie. While he tries to get back to the family before they leave the campground, he becomes sidetracked by an antique store window display that reminds him of his long lost love, Bo-Peep (Annie Potts). While looking for her amongst the old treasures, the sheriff is confronted by Gabby Gabby (Christina Hendricks) and her band of ventriloquist dummies who want something from Woody that may change everything.


As parents try to work through the post-traumatic experience of Toy Story 3, there may be an apprehension to embrace these characters again. First-time director Josh Cooley manages to make the transition with the help of a masterful script from Stephany Folsom and Andrew Stanton. By capitalising on new characters and Bo-Peep, they prove that there are more storylines than merely Woody and Buzz’s friendship to consider with this ensemble cast.

The only elements that may be difficult for the younger set to embrace may be Forky’s metaphysical experience and the scarier aspects of the antique store. Ventriloquist dummies always manage to freak people out and it is no different with their existence in this film. Yet, these two components of the story are wrapped in the winsome and endearing journey of some of Pixar’s most beloved characters. The focus on Bo-peep’s narrative provides a modern statement of female empowerment that is softened by the love story with Woody. Then to include Keanu Reeves as Duke Caboom, the Canadian version of Evel Knievel, was a brilliant turn of fun and action.
For all of the Toy Story fans who wondered if the world really needed another instalment of these cherished toys, the tentative answer would be a positive one. They do manage to squeeze every last bit of magic out of this franchise with this movie which proves to add something to this fantastical world. The hope would be that this is the final stop of the journey for Andy and Bonnie’s playthings.
What should parents know about Toy Story 4?

This is a movie that is entertaining for everyone in the family and it would be worthwhile going back and watching the franchise from the beginning. Some of the scenes in the antique store are a bit scary, but no scarier than Sid’s room in the original. The screenplay will give parents a multitude of opportunities to talk with their children about friendship, the value of everyone despite their abilities and the big question of why are we even here.

For those concerned that Toy Story 4 has a hidden agenda due to the current political climate, there is no reason for worry. Unfortunately, there are websites that want to incite unnecessary controversy about every Disney project. It is good to know that the newest cast member, Forky, experiences an existential crisis (Where did I come from?) and that Woody must determine what he will do when he finds Bo-Peep. Beyond these key plot points, there is nothing that parents need to be questioning about taking their family to see this lovely film.
Questions for families
1. What does the God have to say about my purpose? (Ecclesiastes 2:24, 2 Thessalonians 3:10)
2. What does the Bible have to say about persistence? (Luke 18: 1-8, Galatians 6:9)
3. Does God care about my life? (Matthew 6: 8, 26) 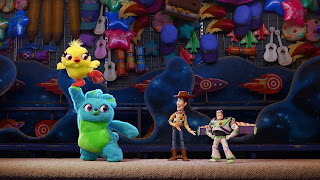