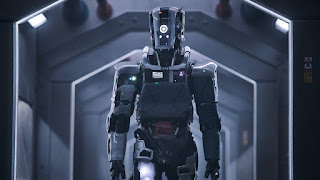 None of the characters we meet are ever given a name, and the named characters (whom we never meet) all have well-known biblical names: Jacob, Rachel, and Simon.
Russelling Reviews:
3.5 stars
The ethics of artificial intelligence continue to be a driving force behind books, films and TEDx talks. I Am Mother is Netflix’s latest entry into the dystopian genre, where the line between robots and humanity are blurred. An adventure that is more philosophical and cerebral than the usual action-thriller. The all-female cast delves into some of the more in-depth enquiries of life while packaged as a science-fiction drama.

The film is set in the not too distant future where an inexplicable extinction event has occurred on earth. The focus of the story begins within a bunker that was established to repopulate humanity. The caretaker of all of the remaining human embryos is a sophisticated robot aptly named Mother (voiced by Rose Byrne). She has the responsibility of raising a child who is birthed through an automated System. Then she progresses to raise one child's development over a 38 year period, oddly the girl that is introduced through this time line is only in her teens and named Daughter (Clara Rugaard). The female student is raised to develop her mental capacities, physical prowess and her philosophical distinctions.
This unconventional utopian micro-society is disrupted by two intruders from outside the capsule. First is a mouse who manages to invade the sterile environment and despite being fascinating to Daughter, the creature is destroyed because of its potential contamination. Then comes a dramatic turn, a wounded woman (Hilary Swank) attempts to get into the facility and causes Daughter to question everything that Mother has told her over the years. The moral and philosophical tug of war for the truth that ensues between the three women culminates in an unexpected conclusion that will leave audiences pondering for decades to come.
Director Grant Sputore’s film manages to cut that fine line between a sci-fi adventure and a profound statement on humanity. Those looking for a display of action and computer-generated creatures need not tune into this thought-provoking tale. Not that action does not enter into the screenplay, but the heart of this movie is meant to challenge society's thinking as it entertains. This is a film that will cause audiences to consider their stance on artificial intelligence, philosophy, religion, the value of life and when it begins. 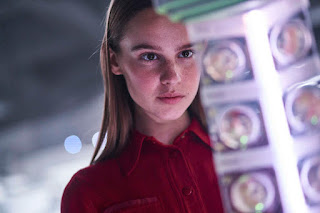 The methodical manner of Mother represents the pacing and measured tone of the whole experience. Every step of this journey seems to have an underlying  purpose and points to something else within the narrative. Examples would be like the mouse being a metaphor for the woman or how the origami signals a significant shift in the storyline.  Even the glaring plotholes and seeming lack of explanation for the extinction provide a bridge to more questions than answers as the screenplay unfolds. Byrne’s voice was a perfect combination of calm resolve that manages to contain disturbing underpinnings of hostility.  Clara Rugaard was captivating in the role of daughter and captured the central role over her robot counterpart and her only other human supporting counterpart. Hillary Swank was great when she was on-screen, but under-utilised.
Rarely does a film leave the audience screaming for more in this era of overproduced and CGI driven sci-fi, but I Am Mother could have been longer. Except Michael Lloyd Green's script does provide the incentive to watch this multiple times to catch the questions that seem to go unanswered. In the same vein as 2001: A Space Odyssey and Blade Runner, this is a fascinating experience that will offer conversations that go deeper than the run-of-the-mill fantasy adventures by challenging people to ponder what they would do in this scenario. Thanks, Mother.
REEL DIALOGUE: Why are we fascinated with finding a 'new and improved' human? 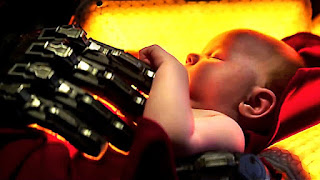 As the story progresses, Mother begins to exemplify the underlying desire to create a human that has superior intelligence, morality and who will not exert their power over the world, but care for the human race.
This is one of the considerations that is addressed in the words of the Bible. Based on the premise of the creator God who made all mankind in his image, it is no wonder that God's creation, would want to create. Even robots who are the creation of the creation. (Wrestle with this that existential consideration) The desire to create manifests itself in art, food, clothing, housing and even into the sciences. There is a multitude of moral juxtapositions to wrestle through in this consideration of creating new life, but the very nature to create is ingrained in humanity.
The only challenge is that God continues to prove that he is the only one to get it right when it comes to the creation of humanity. So, is the desire to create new life merely a lesson in futility or too hard to deny? Discuss.
Questions
1. What does it mean to be human? (Genesis 1:27, 2:5-25)
2. As a creator, what was God's purpose in creating mankind? (Isaiah 43:7, Colossians 1:16)
3. Is God a perfect and flawless creator? (Genesis 3)