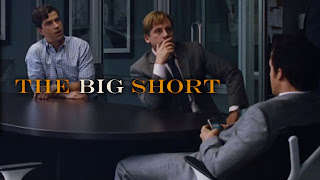 Sometimes things are not what they seem

Walking into the cinema...
What was the cause of The Global Financial Crisis?

The financial meltdown of the world economy in 2007 remains a mystery to many outside of the finance industry. The media focussed on the U.S. housing market and many of it's largest banks, but the for the average person the whole incident is still a bit of a quandary. With his book, The Big Short, Michael Lewis attempts to make this global catastrophe understandable by telling three different stories of individuals in the finance industry. These men saw the bubble of the U.S. mortgage housing market and took the risk to bet against the system. Director Adam McKay (The Other Guys) delivers Lewis’ stories of Michael Burry (Christian Bale), Mark Baum (Steve Carell) and retired investment banker Ben Rickert (Brad Pitt) as they investigate the demise of one of the most trusted financial institutions in history, the U.S. housing market.
This description could cause many to give this exceptional film a miss and that would be a film-viewing travesty. With this film, Adam McKay manages to do something that is rarely achieved in economic schools or on the silver screen, they make global economics accessible, interesting and even entertaining. Mortgage lenders relied on the fact that the general populace would not be able to understand the intricacies of housing finance, which led to the demise of this institution. Fortunately, the writers of The Big Short do not leave the audience without explanation. In amongst the engaging dialogue, well-written characters and on-the-money acting performances, McKay delivers well placed vignettes that provide enough information to keep the audience informed of the details of the fraud that led to the downfall of the U.S. and global financial systems.
From the trailers, there is an assumption that the stories of all of the key players are interwoven. Outside the awareness of the anomalies in the market, these three stories run on different parallel tracks. Each team has to go through their own means of investigation, deal with their unbelief of the market and react to the moral implications of wagering their reputations against one of the most trusted institutions in history. Brad Pitt, Christian Bale and Steve Carell provide some of the most original performances of their careers. Showing their ability to get lost in their characters to the point of being unrecognisable from most of their previous roles. Outside of the excessive language and lifestyles of those within this industry, there was little to diminish the value of the writing and acting of this tale of economic woe.
What might cause the most discomfort within the social commentary of this film is the utter ludicrous nature of the rise and fall of an institution that many home owners have come to put their faith in over the years. Due to the historical nature of the story, anticipating the eventual failure of the system is managed masterfully by McKay. Like watching the arrogance of the makers and the captain on the Titanic, which lead to the sinking of this celebrated vessel. The writers, director and actors deliver a story that provides the same level of suspense through to the end of the credits of this economic shipwreck. The subject matter of world economics will cause some people to give this film a miss, but in making that foolish choice they will have missed out on one of the best films of the year.

REEL DIALOGUE: What are some of the bigger questions to consider from this film?
Ethics. Morals. Finances. Justification. If allowed the opportunity to break the law, get away with it and make money in the process, would you take the opportunity?

The Big Short takes a magnifying glass to the ethical and moral implications of the finance industry, but the real issue is watching as all involved try to justify their decisions. One of the key story elements occurs while Mark Baum and his team investigate the housing market in Florida. They interview men who are fleecing the system by taking advantage of immigrants and strippers. These men shared all of the morally repugnant things that they were doing, but they bragged about their actions and shared their justification of becoming rich in the process. It exposes a portion of human nature that shows that when people get engrossed in their sin, justification becomes the method of convincing themselves that they can do it, because everyone else is supposedly doing it too. A vicious cycle that never leads to good results in the end.

Leaving the cinema...
Rarely does a film surprise me, but this film was entertaining, engaging and educational. Well done to McKay and team on The Big Short.