Star Wars: The Force Awakens - It is finally here and it was worth the wait! + RRs Ranking of the Star Wars franchise 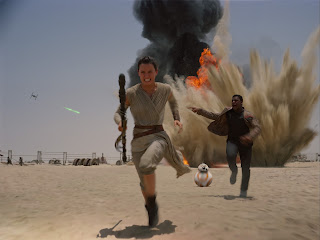 Was it worth the wait? Yes!

Walking into the cinema...
I am trying not to get too excited... PLEASE don't disappoint me JJ!

Growing up seeing Star Wars in cinemas was a highlight of my childhood. Prior to the internet, going to see a film multiple times at the theatre was one of the primary means of entertainment on the weekends. The original Star Wars trilogy provided some of life's greatest film memories with friends and family. Not to be overly dramatic about the franchise, but Han Solo, Luke Skywalker, R2D2 and Darth Vadar had a significant impact on the lives of multiple generations. When Disney bought the rights to this beloved franchise, there was a skeptical, but hopeful murmur amongst fans. Then to choose J.J. Abrams to helm the next instalment brought a similar cynical feeling. Primarily due to his treatment of the last Star Trek film, but regardless of this misstep in his career, he and the House of Mouse has managed to develop an unprecedented anticipation for Star Wars: The Force Awakens.
The story begins three decades after the end of Star Wars: Return of the Jedi. The story is an intersection of the loner, Rey (Daisy Ridley), the traitorous Stormtrooper, Finn (John Boyega) and the heroic pilot, Poe (Oscar Isaac), as they attempt to find their roles in the universe and within the rebellion against the Galactic Empire's First Order. They must determine to fight or run from Kylo Ren (Adam Driver) and his stormtroopers. Their mission is to get critical information to the Rebel Alliance about a missing Jedi leader. During their race against time, they come into contact with many of the warriors of Star Wars past. These familiar and beloved faces attempt to help this new generation to find their way and help them to discover their past and direct them to their future. Does this storyline sound familiar? Sure it does, but this formula continues to work.
J.J. Abrams and  Lawrence Kasdan (The Empire Strikes Back) have managed to write a script that is true to the original trilogy, but allows for fresh new characters that satisfy the nostalgic in the audience and provide something for the new generations who will  inevitably fall in love with this long-standing franchise. At the heart of the film is a solid script with a wealth of characters that provide a joy ride through childhood memories that are complemented with new players. The burgeoning cast help to develop a thirst for a new chapter in this series. Abrams also manages to take this strong script and surround it with amazing sets and effects that honour the 'galaxy, far, far, away,' but bring it into this era by capitalising on exceptional visual and sound effects. (There is no benefit to the 3D screening, this film is great in 2D or 3D).
All that being said about the behind the scenes work, the real magic happens in front of the camera. It is no secret that most of the cherished members of the original trilogy are back. Harrison Ford continues to fill the exceptionally charismatic role of Han Solo and Chewbacca, C3PO and even General Leia are welcomed back into our lives through this new instalment. The veteran players are worth seeing again, but this chapter is primarily a passing of the baton onto the new cast of young talent. These are big shoes to fill, but this new lot of actors seem fit to carry on the mantel of Star Wars. Daisy Ridley and Jon Boyega manage to hold their own with the original cast and leave enough unanswered questions about their roles to make the audience want more from them. Even the new villain  Kylo Ren played by Adam Driver, makes the grade. He is not Darth Vadar, but no one can be this archetype of evil. In realising Ren cannot replace Vader, Abrams and Kasden have written a completely new type of villain. Kylo Ren represents a young and vulnerable antagonist who may prove to provide a different level of evil to this universe as he matures. This young cast were satisfying in their roles and provide a new enthusiasm for the future of the Star Wars franchise.
There is little negative to be said about this new venture in the Star Wars universe. It does feel a bit like a rehashing of the original film, but there is enough original material to provide a new spin on this familiar galactic experience. In the end, it was exciting, humorous and fun. Star Wars: The Force Awakens provides old style film making with a fresh spin. Even for the skeptics or those who have never engaged with this film series, this film is worth the time to see and makes going to the flicks fun again.

REEL DIALOGUE: What are some of the bigger questions to consider from this film?
When the original Star Wars came out there were concerns from Christian groups about 'The Force' and the religious undertones of the message. The Force is not a biblical concept, but the Bible does have much to say about the spiritual realm. Instead of avoiding this film because of its spiritual worldview, this might be a good time for parents to go see the film with their children and discuss what was being taught in the film and what the Bible has to say about God and the universe that he created.

Leaving the cinema...
It was a great film and worth anyone's time. Well done to JJ Abrams and crew. You need to see Star Wars: The Force Awakens in theatres!

RRs Star Wars Films Rankings
This beloved franchise has had it's hits and misses. Which were the best and the worst? Here is the list requested by fans from Russelling Reviews
What do you think? How would you have ranked them?