Southpaw - A solid performance, but not a knock out - 2.75 stars 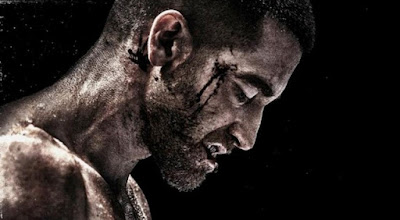 A fighter knows only one way to work. -Billy Hope

Walking into the cinema...
Is there anything new to be said about the life of boxers?

As the current boxing Light Heavyweight world champion, Billy Hope (Jake Gyllenhaal) has come to a crossroads. The sport has taken a toll on his body and he has sustained an eye injury that forces him to take the advice of his wife, Maureen (Rachel McAdams), and consider the next step in his career, retirement or going out on top with an HBO contract. During a charity event, a verbal altercation turns to a series of violent acts that lead to the shooting death of Maureen. Due to this tragedy and Billy’s desire for revenge, he starts down a path of self-destruction through the use of alcohol and drugs. During this vulnerable stage of his life, he attempts to hold onto his life style, sanity and daughter, Leila (Oona Laurence), by going back into the ring. This choice leads to a series of events which leaves him suspended from boxing, penniless and having to turn Leila over to Child Protective Services. During his life's downward spiral, Billy must find a way to sober up and get Leila back. His only solution is to go back to the only option he knows, the boxing ring. First he works as a janitor in a gym, but gets to know the trainer Titus "Tick" Wills (Forest Whitaker). After getting his life back on track, Billy convinces Tick to become his personal trainer and eventually help him to prepare for a bout with the man who he credits with leading to his downfall. Southpaw is a familiar boxing tale of riches to rags to redemption where Billy Hope has to reach deep within himself to find the man he needs to be for his daughter and to rediscover the champion that he had been to the world as a boxer.

Two men pummelling each other in a ring for money has been a storyline since the inception of moving pictures. It provides a brutal backdrop to the human experience at its most visceral level. Besides the original Rocky and Million Dollar Baby, these stories of boxers tend to be elemental and predictable. In the hands of director Antoine Fuqua (Training Day), there is an expectation that he will rely heavily on the performance of his lead actor to win over the audience and pull the story along. Was Fuqua able to achieve this goal? It is a split decision. Jake Gyllenhaal proves that he can carry a film and channels his method acting prowess to make the character, Billy Hope, believable and vulnerable. Gyllenhaal always seems to be on the verge of acting greatness, but super stardom seems to allude this acting journeyman. Fuqua surrounds his lead actor with a stellar cast that give the potential depth for a ground breaking film. Forrest Whitaker effortlessly steals each scene that he shares with any actor and is convincing as the flawed, but inspirational trainer. Also, the impressive young actress, Oona Laurence,shows her acting abilities and has the potential for a long career. But, even with all of these key acting strengths there is something missing in Fugua's corner. It is not the thespian talent, but the overdone storyline. The story can be compared to the punching bags in Tick Wills gym. The bags and the script feel like they are past their prime, the bags are held together by tape and on the edge of falling apart with each ensuing punch. The same could be said about Fuqua's story, it feels like it has been overworked and is past its prime. Southpaw contains enough original components to make it entertaining, but not enough to pull it off the canvas of a run of the mill boxing film.
As Billy is trying to get his life up off the ring floor, he begins to develop a strong bond with Tick Wills. As a mentor and trainer, Tick becomes the voice of reason and reluctantly leads Billy down the path to redemption. During one of the more poignant scenes, they consider one of the tragic occurrences that occurs in the history of this gym in Hell's Kitchen. Tick evaluates the suffering that occurs in his life and in the lives of his boxers and says, 'All I can think is that God must have a purpose for all of this.' It is one of the more endearing scenes in the film and it does open the door to one of life's paradoxes. If there is a God out there, why does he allow bad things to occur and is there a purpose in it all? Southpaw may be a well worn story of a boxer's life, but it does provide a great opportunity to consider why the life that each of us has been given can be bittersweet at times, but it can have a purpose.

Leaving the cinema...
Southpaw was endearing, but forgettable. It has a mean one-two punch. Good director and solid acting performances, but in the end this is not enough to deliver a knock-out visual experience.

This film has an unexpected and unfortunate sting in the tail.  Walking into the cinema... What would you do if you were paralysed from the neck down for the rest of your life?  Russelling Reviews:  2 stars The association that most people may have with the saying 'a sting in the tail' is to experience an unpleasant and unexpected conclusion to a situation or story. This is the case with the directorial debut of Andy Serkis (War of the Planet of the Apes) and the retelling of the life story of Robin Cavendish (Andrew Garfield)  who despite contracting polio, became an advocate for disabled patients . What begins as a beautiful film depicting the history of a fighter for the rights of  those with physical challenges  suddenly turns into a message that promotes euthanasia. All that to say that this review will contain spoilers to ensure people are aware of the underlying intent of the film. Pol